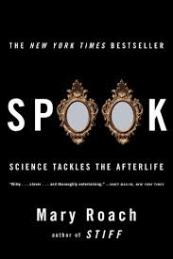 Mary Roach’s books are so much fun, mostly because she’s obviously having a great time researching and writing them. They’re witty and silly and full of a ton of information that I never would have even considered seeking out on my own. Go read them!

Spook is Roach’s attempt to use science to explain what happens after we die. She investigates reincarnation, the existence (and weight!) of the soul, near-death experiences and hauntings. Each chapter covers a different aspect of the afterlife, and various scientific attempts to define or prove it in some way. For instance, she discusses several methods of trying to measure the soul, like comparing the weights of bodies pre and post death.

Interesting stuff, and Roach’s take on it is a good balance between skepticism and “I want to believe”. I am atheist, and still enjoyed the discussions of religion as much as the more scientific ones. I also love how she’s not afraid to call certain researchers “nutters”, as some of them quite obviously are. And in the end, there’s more questions than answers. But it’s a fun journey.

I loved this: “Here again, we must end with the Big Shrug, a statue of which is being erected on the lawn outside my office.”