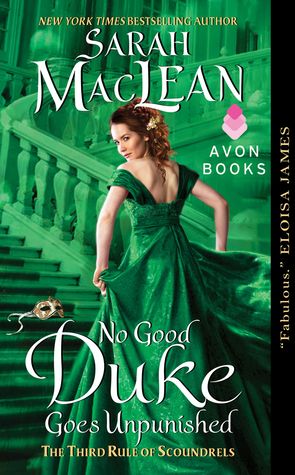 This is the third book in a series, and while romance novels are normally fine to read out of sequence, some of the really awesome developments in this book lose a lot if you haven’t read the rest of the series. These books are top notch romance, so just do yourself a favour and start at the beginning with A Rogue by Any Other Name. And yes, I know the titles are spectacularly cheesy. I recently discovered in a podcast that these are MacLean’s own puns, not anything imposed on her by the publishers. I don’t know whether to be impressed or slightly worried about her.

The great hulking brute known as Temple also goes The Killer Duke. He is one of four disgraced members of the aristocracy who own luxury gambling club The Fallen Angel. When the rich and foolish have lost too much, and have no other recourse, they can fight Temple in the Angel’s boxing ring. Should they win, all their losses will be restored. Not that anyone ever has, but it never stops them from trying. William Harrow, the Duke of Lamont, shunned by most of polite society because he is suspected of having killed his father’s fiancee, is more than happy to take every beating coming, because he’s honestly not entirely sure he doesn’t deserve his moniker.

Twelve years earlier, he awoke with only the haziest memories of the night before, to discover that the bewitching beauty who’d invited him up to her room was Miss Mara Lowe, his father’s sixteen-year-old child bride and soon to be the Duke’s third wife. There was no sign of the bride, only him, naked in sheets soaked in blood. Never convicted as there wasn’t a body, Temple was nonetheless driven from polite society, and survived in the less prosperous parts of town because of his boxing prowess. Now, walking home one evening, he is approached by a woman revealing herself to be Mara Lowe, who, desperate to escape her wedding, did an incredibly foolish thing twelve years ago, and has been in hiding ever since. More on my blog.