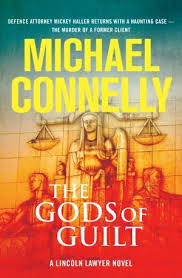 The fifth installment in ‘The Lincoln Lawyer’ series (which I will always think of as the Matthew McConaughey lawyer series) is actually a pretty good read.  I felt like I’d obviously missed some backstory to this plot, which wasn’t explained that well, but I guess that’s expected when you’ve missed the previous three books in any series.  Still, it’s an easy one to pick up and dive into.

Mickey Haller (Matthew McConaughey) is a defense attorney in LA.  Running his own firm from the back of his Lincoln towncar, he rates pretty low on the glamour scale.  His “firm” consists of a junior lawyer, his ex-wife and her new husband, and they basically are surviving month to month on bank foreclosure cases and the like.  This looks to change when a man arrested for the murder of a prostitute asks for him by name… with the recommendation coming from the murder victim herself – an old friend of Mickey’s.  From there it’s wheeling and dealing as Mickey works the angles to save his client.

This was an easy read that kept up a nice pace with lots of good plot development.  It is very much a procedural, so would probably only appeal to those who like the battle of wits in the courtroom and getting the inside scoop on some of the shady deals that happen as a matter of course within the justice system.  Not necessarily a must-hunt-down, but would be a good one to read on the plane flying home for Christmas.