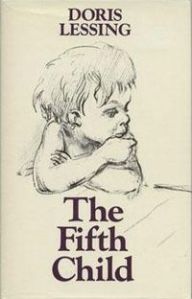 My mum has always been mad about Doris Lessing, mad enough to put me off reading her like some kind of embarrassed teenager. I really enjoyed The Grass is Singing when I read it many years ago, but vague antipathy had prevented me from voyaging any further into the back catalogue of this prolific writer. Her recent death prompted me to pick up the first book of hers I found on my mum’s shelf, which happened to be The Fifth Child. I was startled and left feeling decidedly uncomfortable.

Harriet and David Lovatt are happy to have found each other. It’s London in the 1960s, and unlike most of their peers they’re not looking for casual sex or meaningless encounters. So when they meet at a work Christmas party they are relieved, and quickly map out their lives together. They buy a big house in a commuter town, a house far bigger than they need for just the two of them, and proceed to fill it with children. Harriet is pregnant four times in quick succession, and though she suffers with her pregnancies, relies on her mother to keep the house going, and causes her relatives to roll their eyes, life is good for the Lovatts.

And then Harriet falls pregnant for the fifth time. From the start, the pregnancy is different to the others. By the time Ben, the fifth child, is born, Harriet is ill and exhausted and knows something is gravely wrong. Ben is fearsomely strong, barely needs to sleep, doesn’t speak. While it is hardly spoken of, Ben’s strangeness, how different he is, has started to take its toll on the family. The other children are badly affected, Harriet’s mother leaves, David throws himself into his work, friends and relatives stop coming for Christmas. By the end of the book, Harriet is alone with little but the memories of the family that has been destroyed by the changeling child.

The book is at its best in the first two-thirds, as we get to know Harriet and her family, and as a result can appreciate the havoc that Ben wreaks upon this domestic idyll. The sense of dread that hangs over them from the start of Harriet’s fifth pregnancy only intensifies as Ben is born, and becomes a terrifying and dangerous presence in their lives. The final part of the novel, as Ben gets older and starts to find his place in the world is much weaker, and the theory that Harriet constructs to explain Ben would have been better left unsaid. Despite that, the horror and anxiety that stalks Harriet as she tries to do her best by her children, raising Ben while trying to protect the others from him, makes chilling reading.