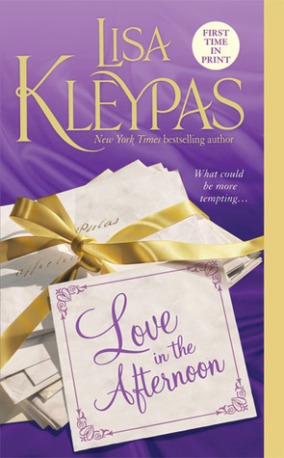 Next on my Thanksgiving holiday romance novel tour is Lisa Kleypas’ Love in the Afternoon, the fourth in the Hathaways series. I’ve read all but the first of them now, and though I’ll get around to that one, I am not in any rush. This entry into the series is the tale of the youngest Hathaway, Beatrix. Beatrix is an unusual young woman, even in comparison with her crazy siblings; one may appropriately call her a beast master, for there isn’t an animal in the world she hasn’t read about, encountered, or rescued and kept as a family pet. Most famous in this series of novels are her ferret and hedgehog, who have made numerous appearances in the series. Beatrix is much more comfortable around animals than people, and despite having many men interested in her, she has yet to settle down with someone.

Beatrix is spending an afternoon with her flighty and ironically-named friend Prudence when she discovers that Prudence is corresponding with a local war hero, Captain Christopher Phelan. She is bored with Phelan’s letters so she allows Beatrix to read one. At once, Beatrix is captivated by the man’s stories of the front lines in the Crimean war and begs Prudence to return the letter. Pru refuses, but allows Beatrix to write back and sign it on her behalf so that she keeps Phelan on the back burner should he return an eligible match. At first Beatrix, a woman who values honesty highly, balks at the deception, but eventually Phelan’s letters draw her in so much that she embraces the task. Their correspondence becomes Beatrix’s most-looked-forward-to activity, and then she realizes that she must stop before someone gets hurt; she has fallen in love with Captain Phelan, and he only thinks of her as the odd girl in the neighborhood that ‘belongs in the stables.’

Captain Phelan returns a war hero, determined to reunite with Prudence, the woman who wrote him the most wonderful letters and revealed to him the woman he wants to marry. Christopher is a damaged man, with what we would now call Post Traumatic Stress Disorder, and finds himself uncomfortable in society. He encounters Beatrix, and unknowingly begins to befriend the woman he was corresponding with over those many months. In time, she works to repair the damage the war has wrought in the man she loves, at the same time hoping that he’ll realize the truth about the correspondence and forgive her deception.

I enjoyed this entry in the Hathaway series. I like the Wallflowers series a bit better than this one, but that is probably because Sebastian’s in those. Beatrix is a really endearing character; she is truthful, sweet and has insight into folks that few aside from her family give her credit for. She is brave and not at all the swooning weak damsel in distress type. Captain Phelan is a great hero; he’s really really really handsome but also damaged, and not to speak against my own sex, but few of us can resist a damaged man (at least in literature and TV, hopefully we work through that before allowing it into our personal life).  Their courtship through letters is charming, as is their renewal of it (unknown to half the couple) in person. This is definitely an entertaining entry from Kleypas (probably my favorite Hathaway so far).