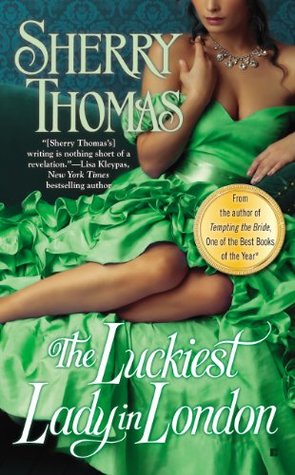 Felix Rivendale, the Marquess of Wrenworth is known in society as “the Ideal Gentleman”. He is handsome, wealthy, charming, generous and famous for his lavish hospitality. Men want to be him, or at least his good friend, and it goes without saying that he’s the most eligible bachelor on the market. He’s clearly not a virgin, but there is not a whiff of scandal surrounding him, either. Few, if any, suspect that his cheerful and impeccable demeanour is a clearly constructed facade. Having been used as a pawn in the emotional warfare his parents conducted against each other, he’s become deeply distrustful of strong emotions, and a master at manipulating those around them so subtly that they believe his suggestions are their own.

Miss Louisa Cantwell is the daughter of a country baron and and one of five sisters, none of whom are likely to snag the wealthy husband needed to secure the family’s fortunes. She is neither particularly financially or physically desirable as a bride, but is also fully aware of it, and has worked tirelessly for the last eight years to plan her perfect season. Using every trick in the book, including bust improvers to make it look as if nature gave her a generous bosom, she’s determined to find a husband by the end of the season, preferably not one who’s too disagreeable. She’s found two likely candidates, and uses every chance she gets to cultivate them and their relatives. She wouldn’t dream of setting her sights on Lord Wrenworth, and is rather appalled with herself when they finally meet and she’s both overwhelmed with lust for him, while at the same time convinced that he’s a scoundrel, who can see right through all her. She’s wondering why no one else suspects that he’s not entirely as he seems.

So what happens next? Read the full review on my blog.