Twenty best-selling mystery authors have teamed up to write a new novel, Inherit the Dead

. Similar to 2011’s No Rest for the Dead, each author writes a chapter to tell a modern noir tale that centers around private investigator Pericles “Perry” Christo. Author Linda Fairstein, who contributes the afterword, approached Jonathan Santlofer to edit a novel that would bring together some of the most well-known crime authors to not just create an original mystery, but a book that would benefit the victim assistance charity Safe Horizon. 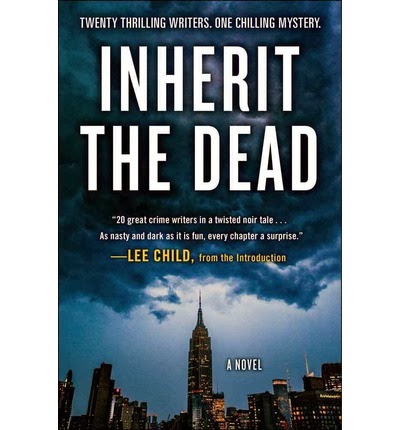 Santofler not only edited the book, but starts things off with the first chapter, which introduces former cop Christo, who has been hired by the ultra-rich Upper East Side society matron Julia Drusilla to find her estranged daughter Angel. The more Christo finds out about the enigmatic yet lovely Angel the more confused he gets. The girl is set to inherit part of a large fortune in a few days on her twenty-first birthday — if she shows up to sign some paperwork. But nothing quite adds up in the case. Her cold-as-ice mother would benefit financially if her daughter stayed gone. Her father seems distracted and unworried about her disappearance, even when her car shows up, abandoned. Her sometime boyfriend has already moved on to many other ladies. Christo finds himself bouncing back and forth between wintry New York City neighborhoods and the rich enclave of the Hamptons, as well drawing parallels to his own complicated past as he searches for the truth, and tries to find Angel — alive.

The authors, for the most part, all manage to propel the story forward, and Inherit the Dead is a fun, fast read. There’s more than a bit of repetition, as each writer seems especially attracted to Christo’s habit of self-criticism, most notably in regard to the fall from grace that led to his dismissal from the force, and his regret at not getting to spend enough time with his daughter after his divorce. His domestic issues are a good parallel to the family drama he is investigating, but they are also all too familiar territory in the hardboiled detective genre. While so many different voices may not offer the reader too in-depth a take on any of the characters, they do sketch out a cohesive mystery. Seasoned mystery fans may not be quite as baffled by a last-minute vital clue that has Christo stumped, but they will likely enjoy joining him on his journey to finally figuring things out.

You can read more of my pop culture reviews on my blog, xoxoxo e