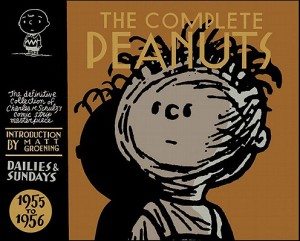 To anyone who’s paying attention, I did skip a volume. I placed an interlibrary loan request for volume two as well, but it couldn’t be fulfilled. Not too surprising, considering the luck I have in similar situations.

This may or may not have something to do with why I so rarely read series. I should’ve known, with as many volumes as The Complete Peanuts is up to, that this was inevitable. Doesn’t make it any less disappointing, especially given buying a copy is currently out of the question, given what each volume runs you ($20+). I’m sure I’ll find a way to read it eventually, but I can hardly stand reading things out of sequence, and only did it this time because that’s how badly I wanted my Peanuts fix.

Not having read volume two, I missed a vital chunk in the comic strip’s evolution, which I’d hoped to track, but I forgot all about that rather quickly thanks to strips such as these.

Schulz knew better than any cartoonist how to blindside you with a sobering dose of truth, and this is even more noticeable in volume three than it was in volume one. It’s not as consistent from one strip to the next, yet that only serves to make strips like the ones above stand out more still. And spotty though it might have been at times, I was still too engrossed to waste time insuring my pictures were level, as I’m sure you can tell from how wonky the ones I’ve included are. On top of that, I read most of it inside Panera, and so I wanted to take the pictures as covertly as I could, which meant being quick about it.

Except I couldn’t go about my business as quickly as this volume went; though it weighs in at over 300 pages, I blew through it too fast to even get the chance to time myself. Two years of comic strips, and I feel like it took me two minutes. It really puts things into perspective. After volume one, I couldn’t fathom how one man could produce so much; after volume three, it suddenly feels insufficient. Greedy as it sounds, I wish Schulz and his strip could’ve lived on indefinitely, and I don’t mean figuratively, since he already has that kind of immortality. To me, Schulz was/is to comics what Eminem is to rap, which is, in my opinion, the only real game in town. Everyone else, even Bill Watterson, is a pretender to the throne at best. So it goes without saying that any Peanuts is good Peanuts and that you should read it. But that’s probably something you could’ve figured out for yourself.