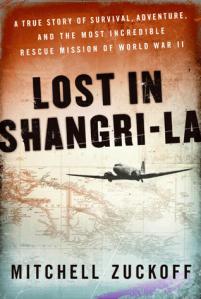 Lost in Shangri-la is a non-fiction account of a group of soldiers stationed in New Guinea during World War II. In the middle of the island was a flat valley that was home to thousands of native tribes that had never seen the outside world. During a scenic tour over the valley, an American plane crashed into a mountainside, killing most of the passengers. One of the survivors was a member of the WOC (Women’s Army Corps) named Margaret Hastings. She, along with the two other survivors, John McCollum (who lost his twin brother in the crash) and Kenneth Decker, have to survive in the jungle amidst possibly hostile native tribes until they can be rescued. On top of everything, they are doing all of this with horrific burns and injuries from the crash.