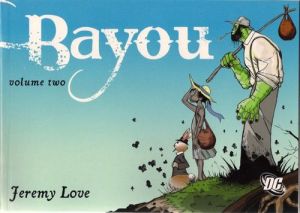 In Bayou v. 2, we learn more about Lee’s mother through a dream that Lee has about her and later on in the book, we learn even more about how all the people (and anthropomorphic animals) are tied into her mother’s story. Or maybe it’s how her mother was tied into their story. Either way, there’s much more going on in the bayou than a weird monster kidnapping little Lee’s white friend Lily.

Again, the style is frequently creepy but also sumptuous and inviting. You want to know who these talking animals on the chain gang are. Why are they on a chain gang and why does one not want to be freed? One of my favorite parts of the book was when Lee and Bayou go to a juke joint looking for answers and a large, adult bear hits on ten year old Lee. His wife bursts in with a surprising exclamation of, “REVEREND BEAR!” So much for men of the cloth. And it just gets worse when the bear tells his irate, jealous wife that Lee came onto him. AND SHE BELIEVES HER HUSBAND. She turns to Lee, calling her a heifer and asking her if she was trying to steal her husband. It’s ludicrous, but you know things like this have happened before in dive bars before and this type of visceral depiction just brought it all home. Shortly thereafter, the juke joint gets hit by a magical tsunami that was meant to wash Lee down to a creature who would devour her, and Reverend Bear turns his philandering scumbaggery into him being the new Noah sent to lead the patrons of the dive bar through the floods. When his wife hits him and tells him to, “shut the hell up, heathen!” I totally laughed out loud.

Through it all, Bayou is there to protect Lee as she gets closer to finding out just what it was that took her friend and how it fits into a much larger world than she ever could’ve imagined. The ending of the second book, though, finds her jumping a train after witnessing the reality of Jim Crows attacking her beloved Bayou. The way symbolism and history come to life in these books is rather amazing. Can’t wait to read volumes 3 and 4.