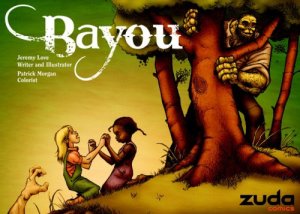 This is a gorgeous and disturbing graphic novel that deals with race relations in the deep South by giving the reader a heap of magic to both temper and incite discomfort. In the beginning of this first volume, we’re introduced to little ten year old Lee as she’s tromping through the bayou because “Sheriff Somerset paid [her] and [her] daddy three dollars to fish Billy Glass out the bayou.” Billy was a young black boy, not much older than Lee. We don’t find out what brought him to the bottom of the bayou until v. 2 (which is my next review), but given the deep South and Lee’s misgivings, you can guess.

Shortly after this happens, we’re introduced to Lee’s friend, a little white girl named Lily. While the girls are playing, a hand from the bayou snatches the necklace right off her neck and disappears. Lily is beside herself, knowing her mother will punish her for losing her necklace. She tries to get Lee to help her find it, but Lee has to go home when she hears her father calling. Lily, not knowing what else to do, lies to her mother and tells her that Lee stole her locket. The police come and and it’s decided that Lee’s going to work off the locket “she stole” because there’s no denying a white woman’s claim against a little black girl. You’d think life would go back to normal then. And it might’ve, if the man the bayou hand belonged to didn’t come back while Lily and Lee were looking for the necklace and snatch Lily. The people in town freak and think Lee’s father kidnapped and hurt Lily, so they arrest him and naturally (for this setting) talk of lynching starts right up.

And so ten year old Lee goes on a mission to find the people who will help her get her friend back from the crazy bayou monster that stole her, and thereby clear her daddy’s name. While on her hourney, Lee meets Bayou, a gentle monster that wants to help Lee. He’s creepy, with his weirdly dead-but-alive eyes, but he’s also genuinely sweet and his interactions with Lee are very sweet. He’s kind of like Swamp Thing meets Forrest Gump, cause he’s also a little slow. The journey just gets underway in the first book as Lee seeks out those who will help her find the thing that stole her friend, but also might help her understand what happened to her family and the world around her.