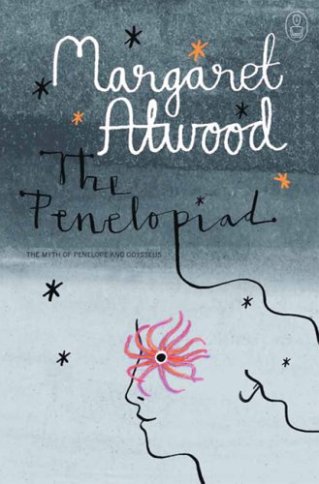 “Who is to say that prayers have any effect? On the other hand, who is to say they don’t? I picture the gods, diddling around on Olympus, wallowing in the nectar and ambrosia and the aroma of burning bones and fat, mischievous as a pack of ten-year-olds with a sick cat to play with and a lot of time on their hands. ‘Which prayer shall we answer today?’ they ask one another. ‘Let’s cast the dice! Hope for this one, despair for that one, and while we’re at it, let’s destroy the life of that woman over there by having sex with her in the form of a crayfish!’ I think they pull a lot of their pranks because they’re bored.”

The Penelopiad is part of a multi-author attempt to rewrite ancient stories from a different perspective. As you may have guessed from the title, this novel is Atwood’s version of the Odyssey, written from Penelope’s point of view. And Margaret Atwood is just such a good writer, y’all. I haven’t read The Odyssey in ten years, and didn’t particularly love it then, but this version is interesting and witty and damn funny.
Homer’s Penelope was a dull, faithful wife. Atwood’s is clever and sneaky and fascinating. In Atwood’s retelling, we get to see exactly what was going through Penelope’s head for those twenty years that Odysseus disappeared. She also creates an answer to the question: why exactly did Odysseus hang Penelope’s maids upon his return?