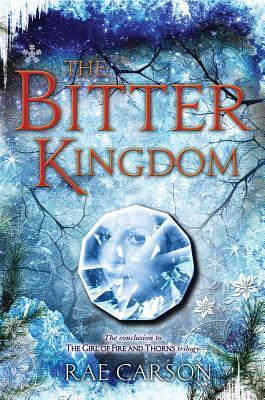 This is the third and final book in the Fire and Thorns trilogy, and as such, it’s not where you want to start reading the series. The first book, The Girl of Fire and Thorns is the place to begin. This review will inevitably contain spoilers for the previous two books in the series, and will also, in part, be my review of the series as a whole.

The Bitter Kingdom starts where The Crown of Embers ended, with young queen regent Elisa’s kingdom on the brink of civil war, and her Captain of the Guard (and the man she’d finally admitted that she loved and decided to marry) taken hostage by soldiers from neighbouring Invierno, who want the Godstone in her belly and are using Hector as bait to get her to follow them into their country. Accompanied by only a former freedom fighter/assassin, her lady in waiting and a failed Invierno sorcerer, Elisa needs to catch up with the soldiers, rescue Hector, figure out what is actually going on with the Invierno sorcerers, and find a way to defeat the rebellious nobles who are trying to destabilise her country and usurp her throne.