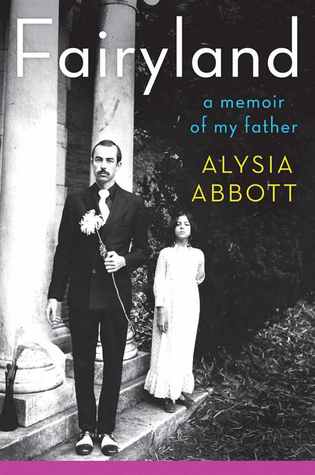 The title of this caught my eye because I thought it was about fairy tale faeries.  Then I learned it was about THE GAYS!!! and read the blurb and decided it sounded interesting.  I didn’t know anything about Alysia Abbott or her father Steve and was interested to learn more about growing up in the heart of the gay scene in San Francisco in the 70s and 80s.  I like memoirs because it’s interesting to see what you have in common with a person and how you relate to them even if their story is completely different than yours.

Alysia Abbott’s story is extra completely different than mine, but of course  I still found lots to relate with.  After her father died, she read through his massive  collection of journals and created a beautiful work.  This is her story, but she has her father’s words to fill in parts she doesn’t remember, as well as being able to get his side of the story for what she does remember.  It feels like the two of them are writing the book together, and it’s beautiful.

Alysia’s parents (Steve and Barbara) met in 1968 at Emory University in Atlanta, Georgia.  Steve told Barbara he was bisexual and she thought it was great.  The two of them moved in together and later decided to get married so they could furnish the apartment with wedding gifts and get cash from her parents.  They continued their open relationship and Steve found that he was empowered by having a wife.  He could be openly gay and people were sort of OK with it because clearly he liked women enough to marry and have sex with one.  And Barbara wasn’t bothered by the boyfriends, even if friends thought she was crazy.

Barbara gets pregnant with Alysia and wants the baby while Steve is panicked and doesn’t think it’s a good idea.  By this time in their relationship Barbara was jealous of Steve’s younger boyfriend and was going to have the baby with or without him around.  She does, and by the time Alysia is three, Barbara is in a relationship with a drug addict named Wolf.  She begins using heavily and Steve slowly finds himself as the only safe caretaker for his daughter.  Wolf is arrested out of state, Barbara goes to bail him out and on the way home she is killed in a car accident.

Steve is suddenly completely alone with a toddler.  He doesn’t fit in with his in-laws and his boyfriend has left him, unable to deal with the seriousness of the situation.  Less than a year after Barbara’s death, Steve packs the car and drives to San Francisco to build a life for himself and his daughter.

Once he gets to San Francisco, he is fully out as a gay man.  He already did come out while in Atlanta, but now he felt fully free to be who he was and to be able to work creatively in his own world.  He was part of the gay art scene and in places created it.  He was a writer and an artist and he surrounded himself with creative people.  The Castro was coming into power and Harvey Milk was starting his campaigns.  It was where Steve needed to be.

But he also needed to be a father and he struggled with this constantly.  He wanted to be a better person, to be healthy and clean and calm so he could be the best father for Alysia, but he was also lonely and wanted someone to love him.  It’s heartbreaking to read the longing in his own words, wanting desperately for someone to share his life with him and Alysia.  He seems to be constantly falling in love, but over and over he picks young men who aren’t interested in relationships, and especially aren’t interested in becoming a father.  He seems himself as a mentor to these young men and surrounds himself with other artists, hoping to guide them and help them find their own voices.  As an editor and creator of his own magazine, he does help them.  He goes on to run workshops and weekend retreats and poetry readings and much more with other artists, many of them gay, but the whole time he’s searching and longing for a partner.  I wanted him to find someone his own age who maybe had similar experiences, but that wasn’t the scene in the Castro District.  He was surrounded by young men, even referring to them as boys sometimes.  These were who he was falling in love with, and it wasn’t going to work, no matter how hard he tried.

Read much more over on my blog.  I’m really glad I read this.