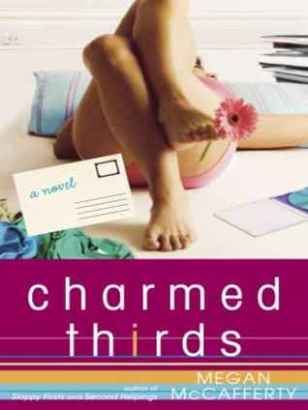 Charmed Thirds is the third in Megan McCafferty’s series on Jessica Darling; this time we find her at Columbia University in NYC and finally free of her sad Jersey hometown of Pineville. Now that she and Marcus Flutie have figured out how they feel about each other, Jessica hopes things will go smoothly for the budding couple. Such an option would make for a boring book, however. Naturally, a cross-country relationship becomes difficult for the pair and Jessica spends her college career figuring out what to do with her life, how to afford dinner, whether she should sleep with her married grad student advisor from her summer project, and what Marcus’ one-word postcards mean, among many other things.

I didn’t love this book as much as I’d loved the first two entries in the series. Perhaps it’s because it felt like more of the same, I’m not sure. Oh Jessica’s neurotic. Marcus and Jessica have a ‘will they/won’t they’ thing going on. Jessica’s parents just don’t understand. Etc.

I think really what it boils down to is that I’m starting to see a lack of growth in our darling Jessica (ha, she’d HATE me for that one) and if you’ve followed my reviews at all this year, you know I struggle with unlikeable characters. That isn’t to say Jessica has become unlikeable, it’s just that her reactions, even at 22 (we get four years of Columbia crammed into one book) feel way too similar to those of her sixteen-year-old self. I won’t pretend that I was the font of maturity at 22 that I am today at 34 (I need sarcasm fonts), but I know I wasn’t the same person I was in high school. Jessica has changed but she continues to exhibit the narcissistic behavior common in teens and that she refuses to acknowledge. This is a really long way of saying that I probably didn’t like this book as much as the ones prior to it because I didn’t have any sympathy for Jessica’s plight. She brings most of the crap in this book on herself.

I’ll pick up the next two books in the series (I think there are just 5, hopefully) just for completeness sake. I will only hope that book four doesn’t spend the entire novel worrying about whether Jessica and Marcus will finally get it together. McCafferty has spent three novels on that issue, I think it can be put to rest for a little while.