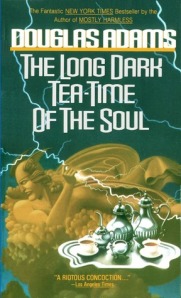 The Long Dark Tea Time of the Soul by Douglas Adams is the sequel to Dirk Gently’s Holistic Detective Agency. True to form, Adams keeps his end of the bargain with the intelligent silliness he’s so known for. This time, Dirk finds himself involved in a plot line that involves Norse gods—Odin, Thor, some creature named Toe Rag. A fighter jet gets turned into an eagle and an unsuspecting woman into a coke machine. Anything goes in this one.
I didn’t like it quite as much as I enjoyed the first book, though. But I guess that’s always a risk with sequels. I really liked it, mind you, just not AS much. That’s sort of like comparing the 3rd or 4th Hitchhiker books with the first two. Can’t be done. They taper off a little. I don’t think this one tapered off so much, though, as it just didn’t have as strong a story. It felt at times that there was just too much going on.
It’s interesting to note in the Dirk Gently books that Dirk is almost a supporting character. He’s never the lead story, nor the most important part. He really is there to just sort of bind it all together, which is actually a really interesting choice for Adams to make. He names a series after a character but he’s never the main character. I like that idea. I don’t know why—just because it’s different I suppose.
All in all, I enjoyed the time I spent with Dirk and have the requisite feelings of man, I should’ve read these years ago. They’ve been sitting in my book queue with 100 other books waiting to be read. The life of a compulsive book buyer who never has enough time. I only wish I had more Adams waiting in my queue, but I’m afraid this was the last of it. Maybe that’s why I put it off so long. I do miss his writing terribly. Nobody else nails that intellectual atheistic sarcastic whimsy like he does.