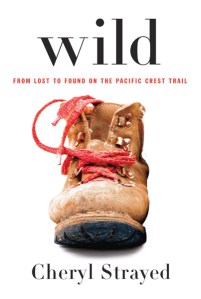 I am not, let us say, an outdoorsy person. I have no issue with being outside per se—it’s a nice enough place, depending on location and season and proximity to a bathroom—but it is my lifelong curse to prefer the climate-controlled confines of a manmade building or, at the very least, the squishy satisfaction of an oceanside beach chair. I want to like The Great Outdoors guys, I really do. It’s just that I’m, what’s that word….tip of my tongue….oh yes, that’s it—I’m lazy.

Of course, it doesn’t take a lazy person to appreciate the concept behind Cheryl Strayed’s Wild: a solo 1,000+ mile hike along the Pacific Crest Trail, which is like the Appalachian Trail’s more rugged and less traversed western cousin. The idea—which Strayed developed in the aftermath of her mother’s death, her own bout with adultery and heroin, and her divorce—is ludicrous, particularly for someone as inexperienced with backpacking as Strayed was. (Though it’s worth noting that, presented with the same challenge, I would be even less prepared: After just six hours wearing moderately ill-fitting flats for a wedding last weekend, I limped myself home so pathetically that you would have thought I’d been shot.)

Wild is about 75/25 devoted to time spent on the PCT versus the events leading up to the trip, and Strayed is only moderately insightful when discussing her past. But by (perhaps intentional) contrast, her time on the trail feels honest and raw, unaltered by the liberties of hindsight, though she is writing years after the fact. Moreover, the relatively small percentage of the book devoted to backpacking minutia keeps Strayed from ever sounding like an expert, and her lack of expertise forces us to confront the magnitude of her mission. Even as the weeks pass and she hones her PCT skills, the idea itself never stops feeling insane, and the insanity is part of what makes the story great.