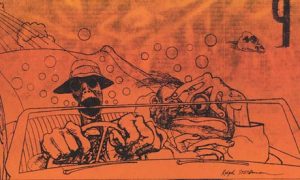 As far back as I can remember, I’ve had difficulty reading the book after the movie. Movies, by nature, impose a worldview on the viewer, the world in question being the author’s, as seen through the eyes of the film’s creators. What tripped me up is trying to shake that in order to not have my opinion of the story influenced by it. Look at Hermione Granger; in the books, it’s not until the Yule Ball that her beauty flowers, whereas in the movies she’s played by Emma Watson, a girl who’s modeled as much as she’s acted. If the movies were your introduction to J.K. Rowling’s wizarding world, you’d have to put them out of your mind if and when you read the books due to discrepancies such as that, the kind that used to put me off of reading the book until an acceptable length of time had passed and the movie was but a distant memory.

Lately, I don’t seem to have that problem anymore. Although I continue to make unfair comparisons between the two, as seen in my Matilda review, I guess I’ve grown desensitized to that inherent weirdness through seeking out a number of these books. Of the five reviews upcoming, four will for books I was introduced to by way of the film, and I have another (Charlotte’s Web) on my bookshelf as I type this. While I doubt I’ll ever find it easy to jump from one to the other, I’m glad there’s no longer a long list of books that are, so to speak, off-limits, since the breaking down of that barrier allowed me to read Fear and Loathing in Las Vegas, which is to drug use what The Eden Express was to schizophrenia. I say this having used no mind-altering substances, not even alcohol, nor been labeled mentally ill, but Hunter S. Thompson and Mark Vonnegut ensconce you firmly in the head of people who have, i.e. them.

One is more of a story, is all; schizophrenia makes for a, well, schizophrenic work, one that I read out of academic interest as opposed to for enjoyment. Terry Gilliam’s spot-on imagining of Thompson’s drug-fueled bender could’ve aided me in picturing all of what Thompson describes, but it was Thompson himself who did the heavy lifting in that regard. He’s never lucid in mind, always hopped up on something, yet his prose is – how, I’m not sure – lucid and biting as can be.It probably has a ton to do with how accustomed Thompson is to drugged states; perhaps, like Stephen King in his earlier years, it was his writing, not just his body, that was dependent upon the various substances he ingested. If the other two pieces, your standard journalism, told me anything, it’s that Thompson is best when his body and brain are running on any number of illicit drugs.

This is partly to do with the attitudes he expresses; recounted in a drug-induced stupor, they seem less of an affront than in the sober writings which follow the title story. Thompson, like a friend of mine, filters nothing and laughs at the concept of tact, a well-known side effect of some drugs, namely alcohol. When you remove the excuse, all you have left is an overly opinionated ass who thinks he’s somehow above it all and that he, and only he, knows how to save every last one of us from self-destructing. There are moments in which I follow, and agree with, what he’s saying, but it’s never long before he launches onto the offensive, attacking his enemies like a child bullying someone younger and smaller than him on the schoolyard.

I have no interest in seeing that, though his massive following , who holds him up as a prophet, who’s since died, tells me others obviously do. That friend of mine recently posted a picture with a quote from Louis C.K.: “Offending people is a necessary and healthy act. Every time you say something that’s offensive to another person, you just caused a discussion. You just forced them to have to think.” On a base level, I agree with this assertion; it’s why I don’t mind that I blew up at a coworker of mine when she actually tried to argue that peoplechoose to be gay. I’d like to think that the tirade she caused me to launch into did at least give her some doubts though, given how steeped in religion her and her family are, I have to admit that’s unlikely. There’s a line, however, between challenging someone in a way which might offend their sensibilities and what Thompson (and my friend) engage in, which is too provocative for most people.

Let me put this another way. Having to defend my stance on homosexuality to this girl, five years my junior, may have sent me into a fit of rage that had my heart pumping furiously for upwards of half an hour, but it did make me think. I thought about why it was that what she was saying was so wrong that I couldn’t prevent myself from blowing up at her. Sometimes, when you’re forced to think like that, you realize you don’t know why you believe what you do, thus engaging your mind in an even more productive type of thinking. Penn & Teller’s: Bullshit!, with its bias against Christianity, caused me to reevaluate my belief system, and it’s probably because of them that I now identify as an agnostic (as well as a libertarian). Before them, there was my sociology teacher, who engaged our entire class in debates where it was us against him, his opinions always leaning way towards the libertarian side of the spectrum. Initially, I and the rest of the class were offended, but before long we were arguing the same points as him, and even building upon them. He opened me to libertarianism and Penn & Teller showed me how right it is.

Had they been tricked into keeping quiet, petrified of offending other people, I would still be a Christian full of doubts and with no idea where he stands on other important matters. Except they all realize that there’s a limit that you cannot exceed or else you’ll offend people so much so that their minds will become closed off instead of open. Penn & Teller, for instance, may espouse many sacreligious beliefs, going so far as to do an episode on the Vatican (which has not been re-aired, or released commercially, since), yet they give anyone of faith fair warning beforehand, and seem more intent upon inspiring debate than belittling those who believe in something they clearly do not. Conversely, Thompson is like Nada in John Carpenter’s They Live, seeing nearly everyone in power as inhuman beasts underneath it all, and making sure they, and everyone else in this nation of ours, knows it.

That’s not a productive means of causing offense; that’s him insulting others who aren’t like-minded and expecting others to simply see how right he is and fall in line, being dicks right along with him. It’s not that he can’t engage me in the same way that Penn & Teller did, but rather that he isn’t content to stay doing that for long. Sporadically, he’ll give me reason to go from nodding along to shaking my head, which is a shame considering he’s a natural at phrasing the controversial in such a way that it’s hard to question it. It’s this ability that has me wanting to read another book of his before I go ahead and write him off.The Rum Diary seems as good a choice as any, seeing as it too has a mind-altering substance to dull, or at least distract from, his less desirable qualities. I’ve seen the film based upon it as well, and though it was a sizable drop-off from Fear and Loathing in Las Vegas, I don’t think it was as weak as others would have you think. Plus, this is one case where I fully expect the statement “the book was better” to hold true.