This is my favorite Harry Potter book. Bar none (well, maybe a few moments from Deathly Hallows qualify…but still). I feel that the awkward transition from the descriptive, childlike wonder of discovering a new world starts to give way to finding one’s place in said world begins here.

Harry’s third year at Hogwarts begins with a bang (or a blow-up) in The Prisoner of Azkaban. Pompous old windbag Aunt Marge finds herself ballooning out of the house, Violet Beauregard-style, after making nasty digs at Harry and his parentage at the Dursleys’ supper table. This comedic scene quickly yields to the terror of running away and discovering that a dangerous murderer named Sirius Black is hunting down Harry. The Ministry of Magic is determined to catch Black and send him back to Azkaban, the prison where all wizards are sent. To apprehend him, they have truly frightening creatures, dementors, standing guard outside Hogwarts. They literally suck your happiness out until they eat your soul up. I think this is one of Rowling’s scarier and more inventive creations. Of course, in this Hogwarts universe, not everyone is who we think they are, so we have some interesting twists and turns that I frankly did not expect the first time I read it.

Sirius is one of Rowling’s more interesting characters in this book (though she definitely drops the ball in Book 5, but I’ll hash that out in my review when I finally get around to reading it). Here is a man maligned by the entire wizarding world who manages to escape a heavily guarded prison where your feelings are slowly sucked away with some semblance of sanity and ambition. Granted, I’m not just saying this because I imagine Gary Oldman every.time.I.read.this.book. 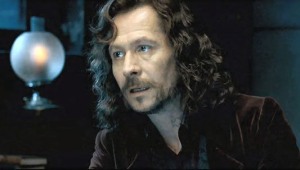 I think he and Remus Lupin are fascinating adults, especially in their rather laddish past with James Potter. And the contrast between them and Severus Snape is also interesting, even uncomfortable. And, when you return to the series after finishing, you find little pieces that fall into place, which makes it even better than the first time you read.

You can also ogle Gary Oldman on my personal blog, The Universe Disturbed (hint: there’s a picture of him in my review for the excellent Tinker Tailor Soldier Spy).