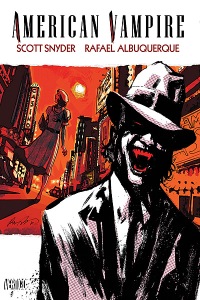 The second volume of comic series American Vampire picks up in a new era of American history, allowing us to see how the vampires and their many different forms and feuds have influenced that history over time. But while this book was good, I didn’t enjoy it nearly as much as the first volume. Maybe because I read that one a while ago and forgot some of the little things that had already happened, as well as some of the characters we had met? Or maybe the story itself just wasn’t as thrilling and compelling this time. I think it may have had a little to do with each. In any case, this second book in the series is comprised of two main stories, with certain characters and relations overlapping between the two, as well as connecting from the previous, first volume (which is to be expected).

For more details on what this entails, my full review can be found here.