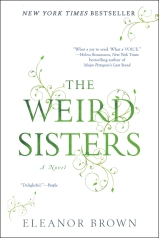 What’s it like living in the shadow of your father, a genius Shakespearean scholar and professor in the prestigious, yet small town institution of Barnwell College? How do you overcome the stereotypes and seemingly predestined sisterly roles of eldest, middle, and youngest? When is it time to admit that you’re a failure, go home, and start over? Probably about the time your mother discovers she has breast cancer and could use help and support of family.

As I’ve said before, I really love reading sister fiction. I’m blessed with a very close relationship with one of my sisters and don’t really know my other all that well. But still, there’s this…weird bond. Sisterly relationships are endlessly fascinating to me. Nurturing, competitive, mentors, rivals, friends, and so much more. The sisters at the heart of this novel are all those and more, as well.

All the sisters are named after Shakespearean women, given their father’s singular obsession with the Bard. Eldest is Rose (Rosalind from As You Like It), three years younger is Bean (Bianca, The Taming of the Shrew, and three years younger than her is Cordy (Cordelia, King Lear). My Shakespearean buff ex-husband would’ve probably been better apt to pinpoint the Bardic mistakes that other reviews have picked at, but I mostly found the peppered references either innocuous or well-placed.

However, the book itself was less than what I was hoping for. The characters wound up being fairly one dimensional and stereotypical. Oh, the baby of the family is supposed to be irresponsible and free-spirited? Enter Cordy, the backbacking wandering who shows up at home 2ish months pregnant and a vague idea of who the father is. She’s the light-hearted, “quirky” sister who is by turns adorable and irritating. As the youngest sister myself, I both cringed and understood her.

The oldest is supposed to be the uptight, orderly one who takes care of everyone? Here’s Rose, the one lives at home to take care of her aging parents (who don’t really need it but “allow” her to do it…well, they don’t need it until her mother gets breast cancer. Rose, who provides such vital services as putting bookmarks in books that her parents have left *gasp* splayed wide open on a table, a couch, a bed. Seriously, this was mentioned about twenty times. We get it. She’s a type A control freak. If she didn’t already have a fiance, I could easily see her story arc being finding a man and therefore needing to grow up and move out of her parent’s house. But no. It just was slightly changed: Rose was faced with whether she should follow her fiance to England, where he was offered an incredible opportunity in his field for two years. At first, Rose thinks it ridiculous that she ever leave Barnwell. Guess which sister winds up leaving Barnwell?

The middle sister doesn’t know who she is since the eldest and youngest are such strong personalities. And also a neurotic, “dark” thief and adulteress? Well, whether or not that’s the stereotype, it is how Bean was painted. The only way she can keep up with her earlier move to NYC was to steal from her workplace to buy designer clothing and accessories. When she gets caught, she goes home to her parents, besotted with grief and confusion. Through a deus ex machina, she winds up with a wholesome new career (degrees and qualifications be damned!) I think her character’s only saving grace was that she didn’t wind up with the character that it seemed ever so obvious that she was going to.

For living at home, there wasn’t all too much depth drawn to the parents. The author did do her research about the steps of cancer, but it felt like she’d done research on cancer. The relationship between the parents was very sweetly drawn but I just didn’t think there was enough of them.

I don’t know how to describe the phenomenon of reading this book. It was partly annoying, and partly intriguing…

How would this turn out? Oh, right. I knew how it was going to turn out. Once you know what each sister has to overcome, it’s no surprise or spoiler to say that by the end of the book, she does, indeed, overcome it.

There were some honestly fun and refreshing exchanges between the sisters and I thought the last few chapters were better than most of the whole book, but that might’ve been just because the conflicts finally got resolved and I knew the book would be ending soon.