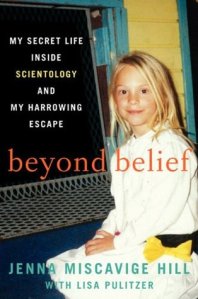 Cannonball Read V: Book #28/52
Published: 2013
Pages: 416
Genre: Memoir/Nonfiction
Before reading this book, I thought for some reason that Jenna Miscavige Hill was Scientology leader David Miscavige’s daughter. She’s actually his niece, but still very much part of a high profile Scientology family. She was born into the religion in 1984 (make her only a year older than myself) before her uncle took over. Both of her parents were devout followers of L. Ron Hubbard’s odd religion and were a part of the Sea Org, which is basically Scientology slave labor that they sign billion year contracts for (no, that is not an exaggeration).
Jenna was devout herself growing up, despite her less than ideal childhood. Her parents pretty much left on her on a Scientology ranch and she only got to see them a few times a year. The ranch provided a place to stay and food to a handful of kids and they also got some schooling, although most of it was church curriculum. That was probably the most interesting part of the book. As a child, I cannot imagine going through all of the “tests” they had to take. Basically everything is done or repeated over and over and over again until is ingrained into these kid’s heads. The repetitiveness is enough to drive most people mad. Then they had the constant auditing sessions where an e-meter was used to clear their thoughts and force them to confess anything they might be witholding. If that last sentence didn’t make any sense to you, you’ll catch on to the Scientology lingo pretty quickly while reading the book.
Read the rest in my blog.