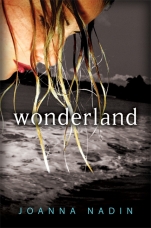 “Be yourself, they say. Be whoever you want to be. Dad, Ed, Mr. Hughes, Oprah bloody Winfrey. Like some crappy mantra.

As someone who’s recently been doing a lot of soul-searching about “who I am” and “who I want to be”, this opening to Joanna Nadin’s book Wonderland got to me. Being yourself and being who you want to be are two very different things. And sometimes, it’s a struggle to both be yourself and also work towards being who you want to be. Especially when, like the novel’s protagonist, Jude, you’re sixteen, your mum committed suicide when you were a kid, and you’re bullied at school by the British band of Heathers.

Luckily, Jude’s best friend from when she was a kid is back. Stella is everything Jude isn’t. Brash, adventurous, sexy, and unafraid to go after what she wants. Jude thinks herself to be plain and boring in comparison and throughout the course of the book, makes an effort to be more like Stella. You know something is going to go very wrong along the way, however, since the first chapter, set in August, opens with Jude and Stella in a car about to go all “Thelma and Louise” because “this is the only way”. The next chapter starts in May and from there, the book goes chronologically until we see how Jude and Stella wound up about to go over a cliff.

The journey there is both familiar and slightly foreign. Jude seems to be a typical teenager who’s having growing pains. She’s having trouble with growing up. She doesn’t think boys would ever like her. Her relationship with her father is estranged since her mother’s death. And she’s got mean girls at school picking at her emotional scabs on a regular basis. But once Stella comes back, Jude starts to come out of her shell. With Stella pushing her, Jude goes to parties, flirts, tries to make it to an audition for a performing arts school.

Where the novel deviates from the norm, though, becomes a fairly well done psychological study in coping with unimaginable loss while trying to grow up at the same time. Jude uses some fairly surprising means to learn the difference between who she is and who she wants to be, and somewhere along the line, how to have the courage to bridge the gap.