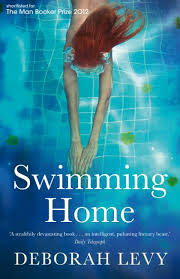 Last week my train home was delayed by, according to the tired-of-this-shit station announcer, “At least 45 minutes.” It turned out to be closer to an hour twenty. I was thrilled. It was just enough time to finish reading Swimming Home, let the whiplash of the ending flip me back to re-read several passages, and walk off a little of the shock and satisfaction of this odd, intense novel.

Spinning a tale from that clunky old set-up, bickering English people on holiday somewhere hot and slightly exotic, Levy sets up a family group in a villa on the Riviera, and sticks a body in their swimming pool. The body is the very alive, very naked, Kitty Finch – a character who reminded me of Poison Ivy. She’s beautiful, and bonkers, and a botany student; she also writes poetry, toxic tendrils of which unfurl in the direction of alpha male Joe. Joe is a famous poet, an adulterer, a loving father, a man on holiday with some of his wife’s friends who don’t much care for him, and he knows that Kitty is dangerous. Everyone seems to see something dark in Kitty – except for Joe’s wife, Isabel, a war correspondent. Isabel invites Kitty to stay.

Thus the stage is set. People bake under the sun and plants wilt. Things begin to rot. Levy sends us through the bottom of the dark pool of an Agatha Christie plot and dredges up something that’s off. But the writing is limber and sparky, each word sinking deeply like a pebble hitting the water. It was kind of like watching a subtitled movie, one with many hazy long shots that you can’t quite puzzle out – you have to sink in to the resonance of emotion, and the otherness of the world created.

It’s an arty thriller, like The Secret History, but with a whole different set of references. It made me very glad to be staycationing in grey England and not somewhere hot and unsettling.