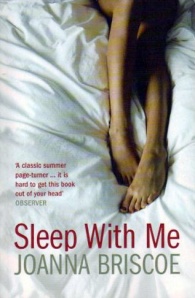 Reading this book was bad enough, and now I have to relive it to write a review. It wasn’t much fun. I just hope this review will be a public service announcement that stops any of you lovely Cannonballers making the mistake I did. Although the biggest mistake was without doubt made by Ms Briscoe when she put pen to paper. Good god this book is hard work.

It tells the utterly indulgent tale of Richard and Lelia. They’re thirty-something middle-class boho intellectuals, he a book reviewer (good god), she a lecturer at university. He’s chippy because he grew up in a sprawling commune-style family in the West Country and doesn’t earn as much money as his friends, she’s chippy because she’s mixed race and hasn’t got over the death of her father. They live in an indulgently pokey flat in Bloomsbury (GOOD GOD), and ‘fuck’ on the first page. Perhaps the writer set out to make them this hateful, smug and annoying in order to give the reader a degree of collusion and delight in the implosion of their prissy little lives. Perhaps. Perhaps they’re just badly-drawn twats.

The plot details the collapse of their relationship, and starts innocuously enough. The evening of said fuck, they conceive a child and go to a party at a stock-broker friend’s ginormous house. At the party Lelia is already convinced she’s pregnant, and Richard drinks too much and acts like a twat. Both of them meet the meek, forgettable Sylvie, the French woman who will turn their lives upside-down. Before Richard knows it, he has embarked on a strangely chaste and mostly unconsummated ‘affair’ with Sylvie, becoming obsessed with her even though he doesn’t find her attractive. At the same time, Lelia is forming a secret friendship with Sylvie. As her pregnancy progresses, this friendship becomes a solace to Lelia as Richard becomes increasingly distant and thoughtless. And so it goes on. Lelia is pregnant, Richard is being a dick, and they’re both lying to each other. But then the book seems to veer into thriller territory, as Sylvie’s relationship with Lelia has layers of complication far beyond the ken of Richard (and, I must say, the interest of this reader), and her deceptions mushroom. Don’t mushrooms grow on manure?

So, here we have a book with a tiresome plot peopled by ghastly characters. Now let me get started on the writing. The narration is split between Richard and Lelia (although Richard gets the bulk of the chapters and page-count). Briscoe doesn’t seem to be skilled enough to give these narrators different voices. Richard’s sections seem ‘feminine’, almost embarrassingly fussy and wordy. The way he describes Lelia and their life together is unlike any (inner or outer) voice of any man I’ve ever known. Lelia is ‘a glowing creature, moody, anxious yet deeply altruistic, though she indignantly and quite earnestly denies it’. Briscoe is a novelist who loves an adverb. She also sucks at dialogue and her punctuation of is it sophomoric. Here’s a choice snippet for you:

“‘I’m sorry. I – I was just feeling super-sensitive last night. You know how – mad I get.’

‘Yes. You know when you can’t, just can’t say what you’re feeling. It was impossible. I’m like a blundering beast. I’ll kill myself if you want. I love you. You’re pregnant! How are you?’”

I really could go on, quoting page after page of laughable conversations between characters that are complacent yet neurotic, but that would divert me from the course of the service I’m trying to do you. Don’t read this book, it’ll stay with you, kind of like the smell of asparagus in your wee.

One thought on “loulamac’s #CBR5 review #27: Sleep with Me by Joanna Briscoe”