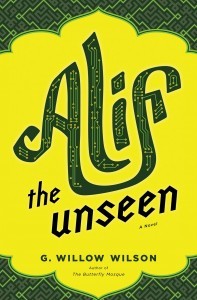 Alif the Unseen is honestly one of the best novels I’ve read in recent memory.  It practically sparkles with fresh ideas and invigorating prose.  Like Throne of the Crescent Moon, I picked up Alif on the recommendation of io9.com’s best speculative fiction of 2012 list, and out of a desire to read more non-Eurocentric fantasy.  But the two books shouldn’t even be compared.  Alif is on a completely different level of fiction, the same level occupied by giants like China Miéville’s Kraken and Neil Gaimen’s American Gods, or perhaps more saliently, his Anansi Boys.

The novel is also a triumph of multiculturalism.  The author, G. Willow Wilson, an American journalist who converted to Islam and moved to Cairo where she wrote for a number of magazines and newspapers, has written a magnificent window into contemporary Middle Eastern culture, and one that stand surprisingly accessible to readers who might not know anything about the history or culture of this incredibly interesting and diverse region.  Where Saladin Ahmed utterly failed to connect with the richness of Arabian and Islamic mythology in his Crescent Moon, Wilson has succeeded in stunning fashion.