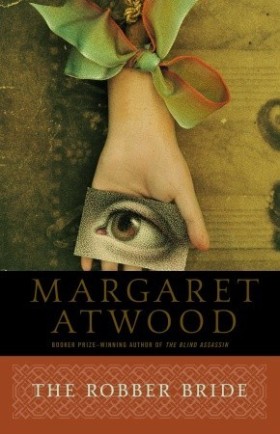 “Extreme good, extreme evil: the abilities required are similar.”
I loved Margaret Atwood’s take on the Brothers Grimm story, The Robber Bridegroom. In the original, an evil groom tricks three women into his home, and eats them all. In The Robber Bride, evil bitch Zenia slowly destroys the lives/relationships of three women she met in college (Tony, Charis, and Roz). After decades of wreaking havoc, she is killed in an explosion overseas. Then she shows up while they’re all eating lunch five years later.
The story is told from the points of view of Tony, Charis, and Roz. Tony is the intellectual, Charis is the mystical dreamer and Roz is the badass businesswoman (and my favorite). At the beginning of the story, they have met for their monthly lunch, and turn to see that Zenia has walked into the restaurant. From there, a flashback to her original meeting with Zenia is told from each woman’s point of view. The story focuses much more on the past than the present, and I loved that.
As with many of Atwood’s novels, this one has a major focus on the relationships women have with men, and with each other. Zenia may have been a malicious, lying sociopath, but each other these woman let her slowly destroy their lives because they believed her to be a friend. A lot of it struck true to me, and probably would to any woman who has known such a duplicitous bitch. Atwood also explores the childhoods of Tony, Charis, and Roz, since their upbringings really influenced what they let Zenia get away with. All in all, The Robber Bride is like a collection of fascinating character stories.