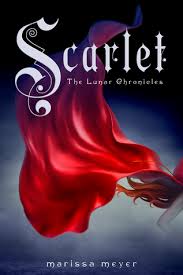 Not long ago I sang the praises of Marissa Meyer’s Cinder which reimaginied one classic fairy tale into a sci-fi setting. Last month, Meyer continued her rebooting process with Scarlet. If one classic fairy tale heroine was intriguing, two should be down right exhilarating. But, as often happens in these situations,  adding another character to the mix requires splitting attention between two different story lines, unless both stories are equally compelling you’re bound for a let down.

Meyer’s stand in for Cinderella (the Chinese cyborg mechanic Linh Cinder) continues to be an intriguing heroine: complex, conflicted, and curious about how to make her way through the world. Now aware of her true parentage (a spoiler from the first book I won’t divulge here) she teams up with a renegade pilot named Carswell Thorne, a literary equivalent of Firefly‘s Mal Reynolds or Star Wars’ Han Solo, who easily rates as the best addition to the plot. But Cinder drifts through most of the story without purpose, splitting pages with a French farmer, Scarlet Benoit, who has packed up her red hoodie (get it?) to find her kidnapped grandmother in Paris. Scarlet’s interesting enough, but she’s saddled with a partner named Wolf who seems neither that heroic, villainous or even all that interesting. Their chemistry is underwhelming, dousing whatever thrill you might find in an underground rebellion about the French country side.

The triumph of Cinder allowed Meyer to set the stage for a much larger series. One that pits Cinder against a wicked queen (reimaginings have to keep those original elements after all). In that sense Scarlet merely puts some more pieces in place to set up for greater drama in the (already announced) third and fourth books. One can only hope that as more pieces appear on Meyer’s board, that she finds ways to make them all as compelling as our main heroine.