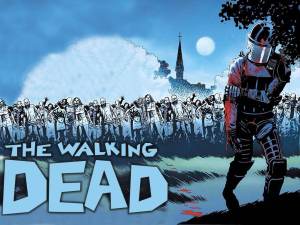 The following is a compilation of my reviews for The Walking Dead, volumes 1-8. Full reviews can be read by clicking at the bottom of each excerpt.

(In case you don’t want to read all of my reviews, here is a catchall one for you: Robert Kirkman’s zombies are disgusting and everything is bleak as fuck. The End.)

So . . . it’s interesting sometimes to re-read things. Mostly when I do this I love whatever it is just as much as before; sometimes I love it more, but in a different way, depending on how old I am, the different experiences I’ve had since my last read, etc. But this is one of the rare cases where, due to a bunch of different factors mostly involving the TV show adaptation of The Walking Dead, my re-read of its source material has been colored in a mostly negative light. I definitely remember liking this for the most part (I can never full-on love something this disgusting and depressing), but this time through I found myself annoyed with a bunch of things that I didn’t even notice the first time through.

‘Days Gone Bye’ is the first volume in the seemingly never-ending The Walking Dead comic series. It follows cop Rick Grimes as he wakes up from a coma to find the world has gone to shit while he was sleeping. His hometown is virtually abandoned and destroyed, and the whole place is covered in zombies (most often referred to as ‘those things’). Throughout the course of the story, Rick meets random survivors on his way to Atlanta to find his wife and son, but when he gets there, he finds the entire city is chock full of zombies and barely escapes with his life. Luckily, the dude who saved him leads him back to a camp of survivors that just so happens to include his wife and son, along with his ex-partner, Shane. So now he’s found his family. From there, Rick has to learn to cope with a different kind of journey — just surviving in the awful world. At the beginning, he’s hopeful and always mentioning to people ‘when things get back to normal,’ but by the end, he’s taking a more pragmatic approach. What if things never get back to normal?

Vol. 2 of The Walking Dead picks up right where we left off in Vol. 1: Shane is dead at the hands of little Carl, and Rick is pretty shaken up. But now that he’s effectively the leader of their pathetic band of survivors, he pulls it together long enough to order the troops to muster out. First thing in the morning, they hit the road in search of a more safe and permanent shelter. But Kirkman’s world doesn’t seem to contain such a thing. Rick’s group is lured not once, but twice, into situations that at first promise safety, but turn out instead to pack a nasty aftertaste.

First, a seemingly quiet and abandoned suburban subdivision feels like it could be a place they could settle down, but then turns out to be packed with zombies, and then the owner of an out of the way farm refuses to let the group stay at his home and almost kills Rick while he’s having a temper tantrum. Oh, and he’s also a nutter who keeps zombies in his barn in hopes that he might rehabilitate them someday. NO BIG DEAL. Both incidents end in tragedy, but after all of that, they still haven’t learned the lesson. ‘Miles Behind Us’ ends with the survivors getting really excited when they stumble over a prison — yeah, that’s going to end real well, guys.

Well, now I remember why I never made it past Vol. 3. This shit is bleak as hell, and extremely disgusting.

Rick & Co. have moved into the prison they found at the end of Vol. 2, and despite even their own reservations about allowing themselves to hope for even a little bit of something good, they start to believe that this place could be the answer to all of their own problems. Even the four inmates they find holed up inside — a murderer, a tax evader, a drug addict, and a robber — don’t do much to dampen their enthusiasm for having a source of food, shelter, and protection against the zombies who are roaming in even greater numbers over the countryside now that the weather is warming up. Rick even goes back to Hershel’s farm to invite Hershel and his surviving children to come live in the prison with them as it’s theoretically safer. You’ll notice how I used that word: ‘theoretically.’

Ah, so that’s Michonne. And what a pleasant little flower she is.

Vol. 4 of The Walking Dead is my favorite of the series so far, although I hesitate to actually use that word ‘favorite’ on something this disgusting. Maybe it’s more appropriate to say that it’s the most well-told volume so far. Our band of survivors have been slip-sliding down the slippery slope of life during the zombie apocalypse. Now that they’ve found shelter, insulated themselves from outside harm, and most of their short-term worries have been alleviated, they can start to worry about the bigger picture, like for example, coming to terms with the fact that living through the zombie apocalypse necessitates a certain amount of adaptability.

Turns out what this series really needed was an outside villain. I’d heard about The Governor, of course, but I didn’t expect that his presence would mean a change in the way Kirkman has been telling his stories, but that’s exactly what happened.

For as scary and tense as the first four volumes have been, there has actually been relatively little movement on the plot front. Moving from place to place, moping around and crying, talking to one another, fighting and having sex with one another, yes. But most of the conflict has come from within the group. There’s just something about the Governor that puts a kick in the rest of of it. Everything moves along faster, less time is spent with whining and moping characters, and more time is spent exploring different corners of the post-zombie apocalypse world. Plus, well, the Governor is a singular creation.

Glen, Rick (now sans arm), and Michonne manage to escape from Woodbury with some other people (three I think? I don’t remember). One of them turns out to be a traitor sort of (his motives are noble, but Rick’s not taking chances). He wants to bring his people back to the prison to take advantage of all the resources, and somehow he thinks he can do so without bringing the Governor along as well. I’m 99% positive the Governor is still alive, even though I do remember Michonne doing some nasty and permanent damage to him. Anyways, Rick kills the tratior before he gets the chance to get the message to his people, even though by most standards he was a pretty good guy. The distance between Old Rick and New Rick grows more vast by the hour.

The Calm Before provides a much needed mental break for the characters and for me (well, mostly for the characters, with a couple of small exceptions). It’s actually kind of notable that two things that would be considered absolutely horrifying in any other story feel really tame here because they are the only two bad things in this volume, where most volumes of this story contain WAY WAY WAY more than that. Also, Robert Kirkman is an asshole, I’m pretty sure, because the fact that all this normalcy and calmness and pleasantness is there can only mean one thing: everybody is about to die.

And that’s probably not even hyperbole.

Well, that was horrifying. But as I did prepare myself emotionally, I wasn’t as horrified as I could have been. I had presumed that everyone was going to die, but everyone didn’t die. Only most people died.

So who’s kicked the bucket? Well, Axel got shot in the head, Tyreese was decapitated by the Governor, I’m pretty sure Patricia got eaten by a zombie but I can’t remember for sure, Alice the nurse got it from the Governor for being a dirty traitor, Billy got shot in the head and Hershel subsequently gave up on life and asked the Governor to shoot him (the Governor obliged), and oh yes, Lori and baby Judy went blammo. Yeah, Kirkman killed a baby. What a dick that guy is. At least the Governor paid for his sins. After his people (belatedly) realized how horrible of a person he was, they allowed him to be eaten by zombies.

Overall rating: Each volume gets better as it goes along, in terms of writing and characterization, but it also gets worse in terms of, well. Everything. So probably more like 3.76859 or something.