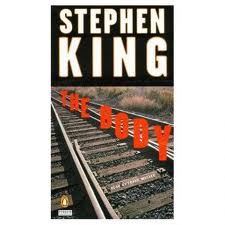 I recently finished reading The Body, a novella by Stephen King. (It was over 100 pages, so it counts!) This is one of those stories, much like Shawshank, that I probably should’ve read a million years ago but for some reason I never did. I’d seen Stand By Me of course, but just hadn’t ever gotten around to the source material. Of course, I had Wil Wheaton in my head the whole time as I read.

This is very much a coming-of-age story about a group of young boys who embark on an adventure, but find themselves in over their heads. They hear there is a dead body and set off to find it. The adventure itself is not the heart of the story, though. The heart of the story is the connection between these friends. They’d do anything for each other that summer, even if later on they won’t be as close. It’s set in the 60s, which was obviously a very different time to grow up. I was almost jealous of them and their camaraderie, their dedication to each other and their spunk.

Gordie, one of the boys, narrates the novella as his future self, a successful writer, husband and father. He’s looking back on the summer that shaped him, that both scared and delighted him. The inevitable detachment of an adult looking back on his childhood self was clearly present, but so was the longing that he had for that innocent version of himself. It was almost a love story to his childhood, even though the adventure had its consequences and everything didn’t necessarily come up roses, the point was that they were there, they existed and they had each other.

One of the bright spots of reading this was the occasional insight into Gordie’s stories. He was already a writer at this young age and shared his stories with his friends, usually aloud. A few of these stories are interspersed throughout the novella. It made me wonder how much of King himself was in there. Was Gordie purely fictional with a few loose ties to King’s own life? Or was Gordie King’s younger version? Even if King never sought out a dead body, I thought it possible that the words/thoughts/emotions could’ve been his real childhood self. I couldn’t be sure. But it made it all the more interesting to speculate about.

I have a few other novellas of King’s that I’ll tackle this year, including finally getting around to Shawshank as well. But this one had such intense heart that I don’t know if it can get any better. I really wanted to meet Gordie, adult or child and just say hey. He was relatable and so REAL through the telling of this adventure. And the fact that he looks like Wil Wheaton in my head doesn’t hurt.