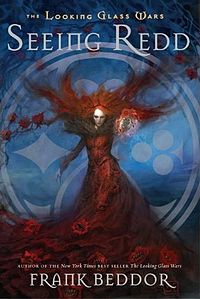 Seeing Redd by Frank Beddor is the second installment in The Looking Glass Wars trilogy by Frank Beddor. I was enamored with the first book, even though I didn’t realize it was a trilogy when I started. I’ve been listening to the series on audiobook artfully narrated by Gerard Doyle. My love of this fantastic version of Wonderland continues with the second book.

Alyss defeated the evil Redd at the end of the last book, but Redd continues to be a menace and is desperate to reclaim the throne she feels she is entitled to. The battle continues between White Imagination and Black Imagination. This time, neighboring King Arch throws himself into the mix and victory could belong to anyone at this point.

This book delves more into the life of Hatter Madigan and a little plot twist revolving around him and Homberg Molly, who, as it turns out, is the daughter he didn’t know he had. It sounds more soap-operatic than it is, and merely succeeds in giving a depth and life to Hatter that was hidden before. Not missing, mind you. Just hidden. He was a magnificent presence in the first book and I wanted to know more about him. Is he really as dedicated and controlled as he seems? Apparently not.

On a side note, Hatter has an entire series of graphic novels dedicated to his adventures. I might have to pick those up.

I’m well into book 3 now and can’t wait (but will be horribly sad to) finish the series. I think so far this will be a set of audiobooks that I revisit time and again so that I can continue to lose myself in this magical world for a while.