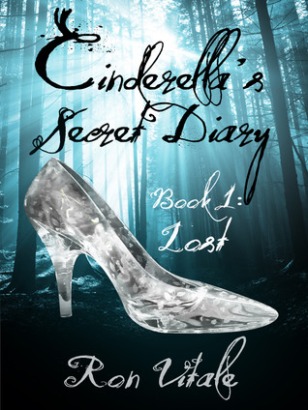 I’m going to start off by saying that I admire anyone who can focus and believe in themselves and their story enough to write a book. Much like someone who’s too scared to get a tattoo but tells themselves they will ‘one day, when they’ve found the right design’, I’ve been nursing my own desire to write a book for many years, and thus far I haven’t. So on that basis, good on you Ron Vitale. On almost every other basis, bad on you. Bad.

I have to say this is one of the worst books I’ve ever read. Maybe not THE worst (that dubious honour almost certainly goes to The House of Balestrom by William Butler, another self-published effort), but this is in my top (bottom?) ten. I know I’m not target market, but this book makes the Twilight saga look like Charles Dickens.

The premise of the book is interesting. What happened to Cinderella after her ‘happy ever after’? I’ve read the Gone with the Wind and Rebecca sequels, and even watched the execrable Sex and the City films, so I’m in no way immune to the charms of finding out what a favourite heroine did next. So that (and the CBR free offer) led me to give it a whirl. Ten pages in I was already regretting it.

The novel opens four years after Cinderella’s marriage. As you might expect, there is trouble in paradise. Cinders has failed to become pregnant, the Prince has grown distant, and the Queen is a cold, manipulative woman. Against this backdrop, our heroine starts to write a journal in the form of letters to her absent fairy godmother, which charts what I imagine was supposed to be her voyage of discovery. She meets a witch, is reunited with said godmother, falls in love, is betrayed and finds out all about her own mother. All of which could have worked. It doesn’t.

The book is a muddle of supernatural and fantasy fiction, with an unfortunate overlap with real historical figures. The appearance of Napoleon’s Josephine dates the events as c. 1800, which would mean the King and Queen in question are George III and Charlotte, with Cinderella’s Prince none other than George, Prince Regent. REALLY?? A portion of the book is dedicated to Cinderella’s experiences wandering Europe with her trusty (or is she?) witch companion, where she is welcomed into the homes of locals and takes part in a giant witches’ gathering. Given Europe’s history of witch-hunts and persecution (women were being executed as witches as late as 1790s), this entire sequence is just another preposterous turn in book already weighed down by its own invention.

The flaws in the plot and setting aren’t helped by the stream of consciousness, malaprop-littered prose. At one point, Cinderella’s ‘thoughts are ever thinking of him’, and she ‘rebukes’ an offer of assistance. When I read ‘My love would be a ribbon stretched through time, a gift of sight, sound and experience, and yet he would one day reject it’, I laughed out loud.

Unintentional laughs were as good as it got. I could’ve done with rescue from my own fairy godmother while I was ploughing through this.