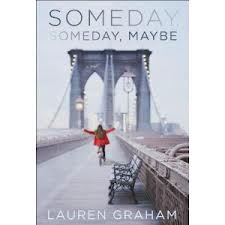 I was always a big fan of Gilmore Girls (and now a big fan of Bunheads. Seriously — stupid name, great show). When I had my third kid a few years ago (who was actually named Lorelei, and I swear, it has NOTHING to do with GG, but more because of a song by the Pogues) and I was up late at night with the baby, I re-watched the entire series on DVD. And what I noticed this time around was that Lauren Graham was kind of a genius in the way she brought Lorelai to life. So when I heard that Graham had a novel coming out — and knowing that her background was in English and Literature — I had high expectations.

And honestly, I wasn’t disappointed.

Someday, Someday, Maybe could be pigeonholed by some as being “chick lit”. But I hate that term, so I’ll just say that this is light, refreshing fiction, with a feminine viewpoint to it. Nothing fancy, but well done and enjoyable.

SSM tells the tale of Franny Banks, an actress struggling to make it in NYC in the mid-1990s. She’s given herself a deadline, and told herself that if she hasn’t had a break by that date, to pack it up and head back home. If she hasn’t done something with acting in three years, it probably isn’t going to happen. Franny has her ups and downs both professionally and personally — but she gets herself a supercool agent, and starts dating a handsome actor, and it looks like things are finally going her way. But of course, the reader knows that maybe Franny might be better off with a different agent, or a different guy…

A few things I really enjoyed about the book:

I LOVED that it took place in 1995. Before cell phones and texting, before knowing what everyone else was doing and where they were at every second of the day. Franny used pay phones and had an answering machine. Also, Franny lives in Park Slope BEFORE it was the cool place to live, and talks about how some of the neighborhoods were dangerous, but the apartments were cheap!

I really liked the insight (obviously, some of this must come from Graham’s experiences at the time) into making it as an actress. Franny struggles to make rent payments, has to work horrible jobs wearing a hairnet, and yet stays dedicated to acting.

I also liked that at the end, although it looks like things are finally on the right track for Franny, her life isn’t perfect and she still has things to figure out.

Lastly, I loved that the book took place in New York and that none of the characters worked in publishing. Doesn’t it always seem like every single fictional female character in NYC works at a magazine? Argh.

I enjoyed reading Someday, Someday, Maybe and hope that Graham continues to write. She has a strong voice and her sense of humor really shines here. I also enjoyed reading the book picturing a 1990′s Graham (maybe circa NewsRadio) as Franny, with a Spin City-era Connie Britton as her best friend/roommate Jane, and maybe big Craig Bierko as Dan, the giant male roommate. That definitely made it more fun for me.

If you are a fan of Graham, or are just looking for a pleasant way to spend a few hours, I definitely recommend Someday, Someday, Maybe. 3 1/2 stars!

I should note that I received an advance copy of this lovely little book from NetGalley.