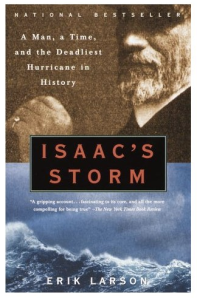 The year was 1900. The place: Galveston, Texas, a growing town with dreams of becoming the next Houston. The guy: Isaac Cline, resident meteorologist for the U.S. Weather Bureau, sent to Galveston with explicit instructions to establish a state-wide weather service, while simultaneously improving the perception of the bureau as—gasp—ineffective at predicting the weather.

So much for that plan. On September 8, Galveston is hit by an enormous hurricane, which over the course of the day destroys the town, kills more than 6,000 people—some estimates put the total as high as 12,000—and lends both anecdotal and scientific evidence to what was only recently proven again along the East Coast: hurricanes are serious business.

For the unfamiliar, Larson’s is a unique style and quality of historical writing. His books, though nonfiction, read like novels, and come equipped with dozens of pages documenting original source materials, everything from archived letters to old newspapers to almanacs of rural farming conditions. In an Erik Larson book, the sentence “The morning was warm as Sally fetched eggs from Bob’s Market,” probably has no fewer than three sources: the weather report for that day, a memoir or letter or autobiography written by Sally herself, documenting said eggs-pedition (sorry), and business records asserting that Bob’s was the only local outlet selling eggs at the time. Consequently, the overwhelming impression made by Larson’s books is thoroughness, and the sheer attention to detail needed to turn fragmented historical documents into a single compelling narrative.

In this respect, Issac’s Storm is no different. The book has a dozen pages of references, and is thus able to introduce readers not only to Cline himself, but to a handful of Galveston’s residents in 1900, some of whom survived the hurricane, many of whom didn’t (it’s a testament to Larson’s narrative skill that a character’s inclusion in the book doesn’t always mean they lived).

My only gripe with Issac’s Storm was a) the lack of photos (in his end notes Larson mentions referencing more than 700 of them, so what gives?) and b) that it isn’t Larson’s best (The Devil in the White City is), which is sort of like saying “That isn’t the best gourmet macaroni and cheese I’ve had.” It’s still great. It still has an impressive number of ingredients. It still reminds me why I love macaroni and cheese, and how much I admire the people who make it. And most importantly, it’s still way better, a billion percent better, than any macaroni and cheese I could make myself.