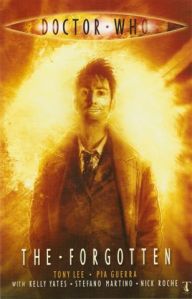 Licensed comics are always a mixed bag. On the one hand, it’s fun to see the further adventures of your favorite characters from movies, TV, or even video games. On the other hand, nothing of real substance can ever happen in them – that stuff, naturally, is reserved for the characters’ original source. The best licensed comics are the ones that manage to tell a compelling story about the characters even in the face of there being no real threat to them in the first place. Good ones also take advantage of the comic format to do things that a TV show on a strict budget would otherwise be unable to do.

Which brings us to Doctor Who: The Forgotten, a miniseries published by IDW that came out in late 2008. It features the Tenth Doctor (David Tennant – well, a drawing of him) and Martha Jones as they attempt to find their way out of a sort of museum that is dedicated to The Doctor. It houses items from all of his adventures throughout his 10 incarnations. The Doctor and Martha have no idea how they arrived in this place, and the TARDIS is nowhere to be found. Also, The Doctor has lost his memory – he can only remember what’s happened to him since he regenerated into his current form – and he must use the artifacts in the museum to help bring it back.

Tony Lee does a wonderful job capturing the tone of the TV series and of the characters themselves. It was easy to hear Tennant and Freema Agyeman’s voices when reading their dialogue. Lee also weaves in tales of The Doctor’s other ‘lives’, as memories come back to the current Doctor with each artifact he examines. I’m not familiar with any of the pre-2005 Doctor Who material, so it was nice to get a glimpse of The Doctor and of the companions with whom he traveled in years past. The flashbacks never felt shoehorned in – they all served a purpose in helping The Doctor and Martha figure out what was going on.

Pia Guerra’s art is well-suited for the story. Her linework, as always, is clean with just the right mixture of realism and cartoonish, and she does a good job of capturing the likenesses of dozens of actors without letting the art look overly photo-referenced. That’s another fine line that licensed comics must walk – capturing likenesses can be difficult for the artist and distracting to the reader – and the art in this book did a nice job. A few other artists join in for some of the flashbacks, but the changes in art style are never jarring, and it’s all held together well by Guerra’s solid work.

The thing that most surprised me about this comic is how well it fit into the established timeline of the TV series. All is not as it seems throughout the story, and to say more about where it actually falls would be to spoil one of the fun surprises of the book, but it suffices to say that this Doctor Who story fits neatly into a very specific window of time for The Doctor, and it fills in a bit of a gap where not a lot of stories have been told in the past but where the potential for more stories definitely exists. I was also surprised by how emotional the whole thing was towards the end. It wasn’t a Russell T. Davies-level of melodrama, but there are several really nice moments for The Doctor in the final chapter of the story, one of which even choked me up a bit.

Doctor Who: The Forgotten may be the best Doctor Who comic that I’ve ever read. It was both entertaining on a story level and educational in terms of finding out more about The Doctor’s history. If you’re in need of a Who fix before series 7 starts up again (in…April? Aw, man…), do yourself a favor and check out this tale of Doctors’ past. In a word, it’s fantastic.