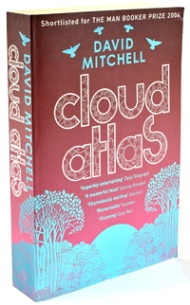 “I wish to finish viewing a film I began watching when, for an hour in my life, I knew happiness.”

A blurb on the back of this novel states that Mitchell “entices his readers onto a rollercoaster,” and while I would agree with that entirely, I would not intend it in the overused sense of a “wild ride.” I would mean a slow, laborious ascent followed by a rapid, eye-watering descent. No twists or turns, but maybe one giant loop.

“Cloud Atlas” tell the tale of souls traveling through time – how their stories link and how their actions influence the whole of an entire planet – and takes the adventure there and back again. The novel begins in the 19th century in, as best as this geographically challenged reader can tell, New Zealand. Adam Ewing, a young notary from the states, is traveling abroad for legal purposes, and we are privvy to his journal which documents his landscapes and the motley crew of sailors with whom he travels. From there the reader travels to Belgium in the 1930’s to follow a young and arrogant musical apprentice, and then on to 1960’s California and into a mystery of political intrigue and journalistic integrity. The novel then moves to present day and tells the tale of a shady and irresponsible publisher, and following his trappings we travel to an all too probable future of clones and consumerism.

The novel climaxes in a dystopian return to primitive living. It is the only vignette that isn’t interrupted and is written in a non-existent dialect. Once we’ve peaked at the end of the world, the novel begins its rapid downhill leg. Connections that might have been missed on the way up all begin to click together and even if the reader had struggled on the way up, as I did, the journey to the end is quickened as the souls and relevance line up like Rockettes.

I really struggled through the first half. The “authors” of the first two narratives were not entirely likable and that is, historically, a stumbling block for me in any medium. The third, a classic mystery, was too political and technical for me – not a genre I would tend to choose to read at all. The fourth was funny and light, but “The Orison of Sonmi-451” hooked me in absolutely. These chapters are scfi-fi at its best. I hit my “a-HA!” moment during that tale (which is not to say the connections weren’t visible up to that point – they were, I just didn’t care), and devoured the rest of the book like a cheesecake about to go bad. Re-read factor is high, because I feel like there are so many more things to see – especially since the first half of the book felt like a chore the first time through. David Mitchell proves adept at several genres and styles, so expect to see at least one more Mitchell review for CBR!